ABOUT THE TIKI TOURS

Tiki Tours, LLC is brought to you by a few local entrepreneurs! What started off as a new addition to our personal fleet, turned out to be the newest tiki charter company in the Northeast. Tiki Tours provides a safe, unique, and exciting boating experience. A new way to enjoy the breathtaking views of Lake George while on the water. Whether you would like to cruise around with your friends on the Lake or stop at a local establishment, our floating, motorized tiki boats are available for 75-minute charters driven by our New York State certified Captain.

Our partner Capital City Cycle Tours was founded with the vision of importing an adult party bike concept to the area as a unique way to combine fun with fitness. A “pub crawl” or predetermined biking circuit of pub and restaurant stops on a specially designed 16-person party bike offers riders an exhilarating and entertaining alternative to an ordinary nightlife jaunt in select Upstate New York cities. It launched June 20, 2014 in The Empire State’s Capital District cities of Troy and Schenectady with Saratoga Springs to eventually follow. However, it doesn’t stop there, Capital City Cycle Tours has plans to expand it’s tours nationwide to accommodate cities with likewise demographics.

Additionally, Capital City Cycle Tours is an interactive, philanthropic community partner that organizes and supports charities and non-profit initiatives such as Tour De Cure, Making Strides Against Breast Cancer, Walk to Defeat ALS and Race for the Cure, to name a few. 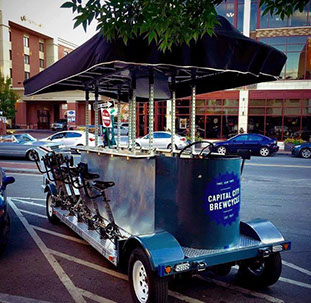